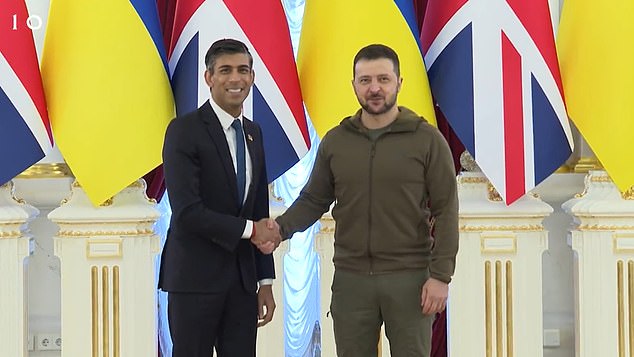 Rishi Sunak has made his first visit to Ukraine since taking office, where he met with Ukrainian President Volodymyr Zelensky and made a £50million arms pledge.

The Prime Minister, who arrived in Kyiv this afternoon, said he was ‘deeply humbled’ to have his first face-to-face meeting with the Ukrainian President.

The UK defence spending aims to ‘protect Ukrainian civilians and critical national infrastructure from an intense barrage of Russian strikes’.

Rishi Sunak has made his first visit to Ukraine since taking office, where he has met with Ukrainian President Volodymyr Zelensky 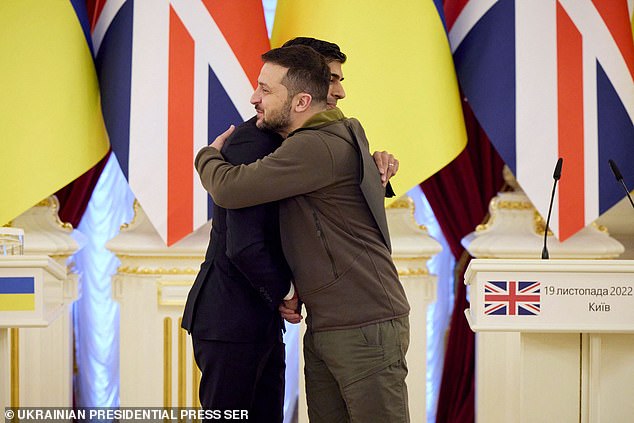 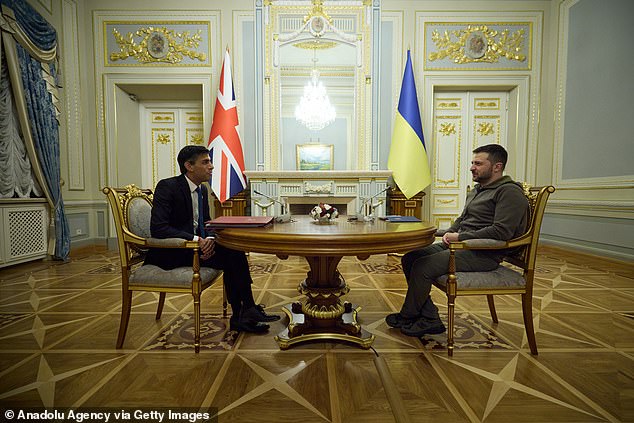 The pair are shown shaking hands in front of the Union flag and Ukraine’s flag, before holding a one-to-one meeting 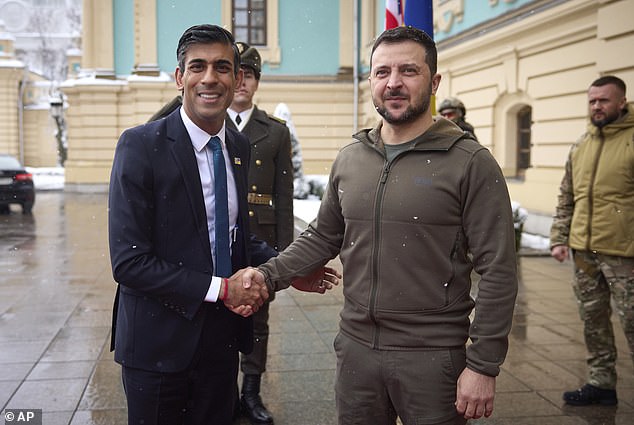 Yesterday saw a bombardment on Kyiv, with concerns that attacks on power plants could lead to a ‘complete shutdown’ as temperatures plummet and the first snow arrives in the city.

Mr Sunak met first responders at a fire station after images emerged yesterday of firefighters battling a blaze at a thermal power plant in the capital which had been hit by a Russian missile.

The team of emergency responders described their harrowing work rescuing survivors from the rubble.

The Prime Minister saw captured Iranian-made drones which have been used to target and bomb civilians in recent months. 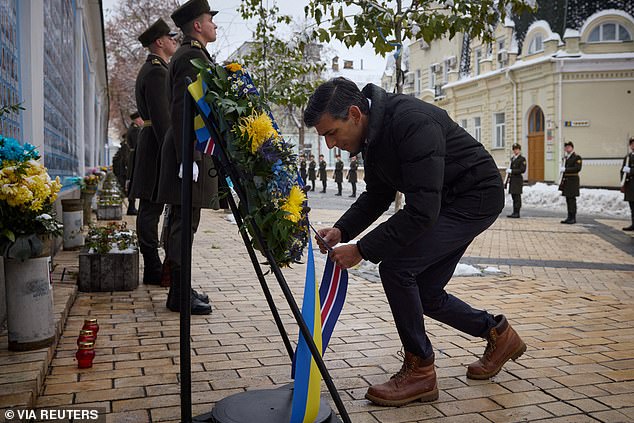 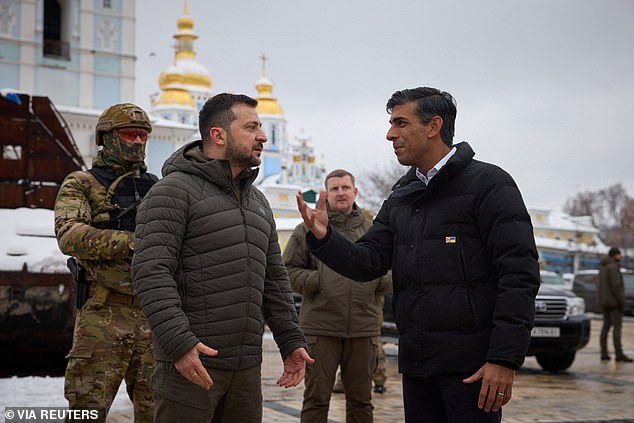 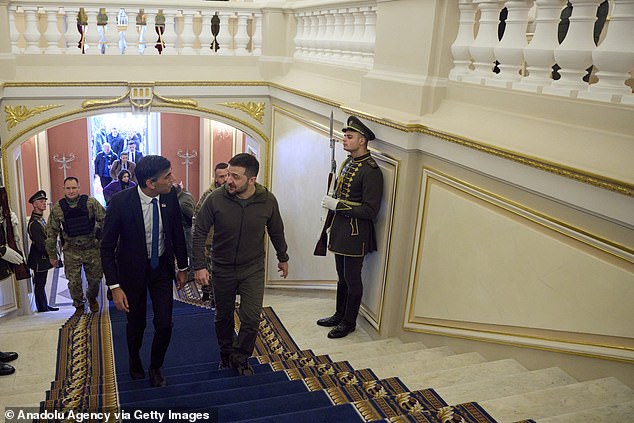 The leaders met at the Mariinskyi Palace, the official ceremonial home of the President of Ukraine 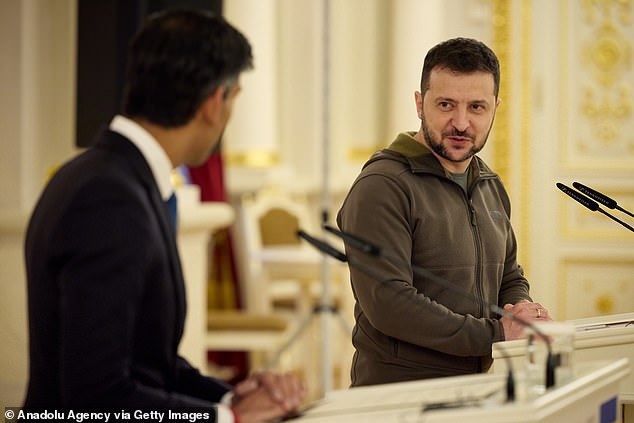 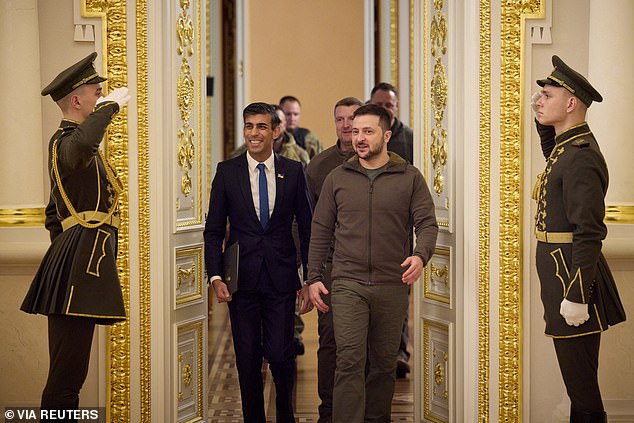 At the meeting, Zelensky described the two countries as ‘the strongest of allies’

As well as meeting one-on-one with President Zelensky, Mr Sunak had a meeting with the Ukrainian Foreign Minister Dmytro Kuleba and Commander-in-Chief of the Armed Forces of Ukraine Valerii Zaluzhnyi.

Writing in English and Ukrainian, Mr Sunak said on Twitter after the meeting: ‘Britain knows what it means to fight for freedom. We are with you all the way @ZelenskyyUa’. 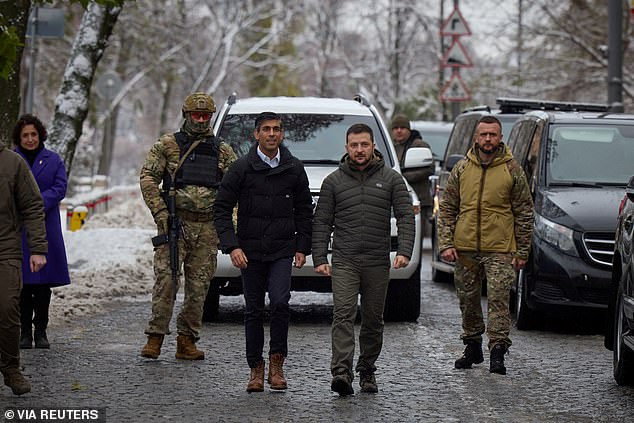 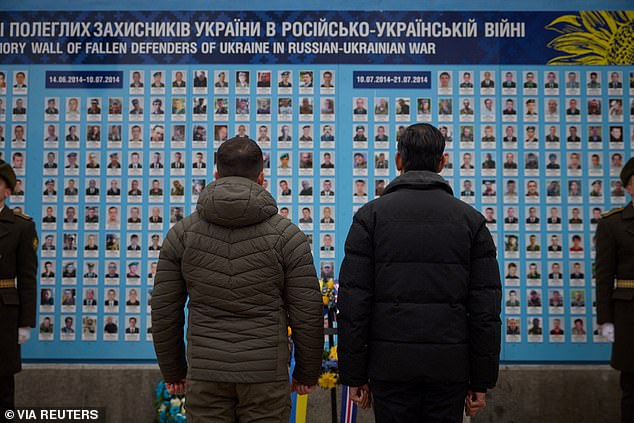 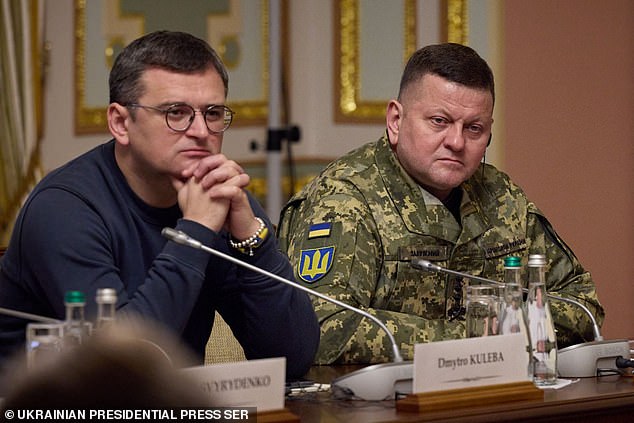 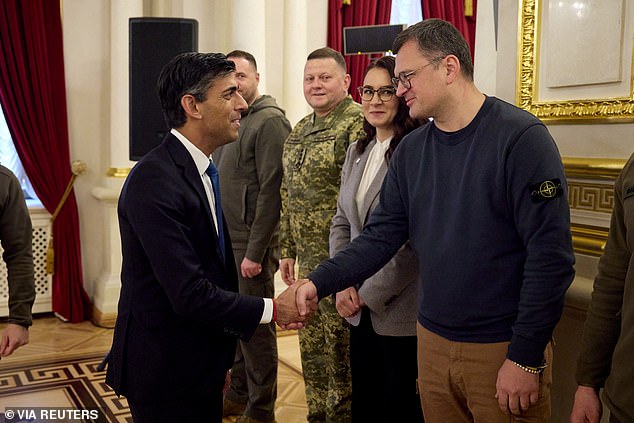 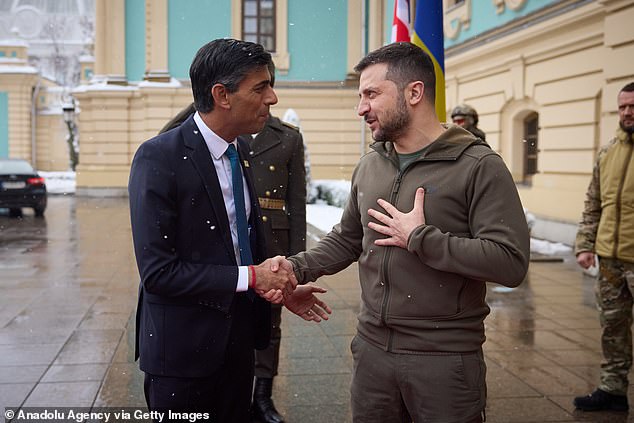 ‘During today’s meeting, we discussed the most important issues both for our countries and for global security,’ he wrote on the Telegram messaging app.

He added: ‘Since the first days of the war, Ukraine and the UK have been the strongest of allies.

‘Together we are stronger and we will achieve the desired results.’

The Prime Minister was welcomed by Ukrainian military personnel.

Downing Street confirmed Mr Sunak’s visit, with a spokesperson saying: ‘The Prime Minister is in Ukraine today for his first visit to Kyiv to meet President Zelenskyy and confirm continued UK support.’ 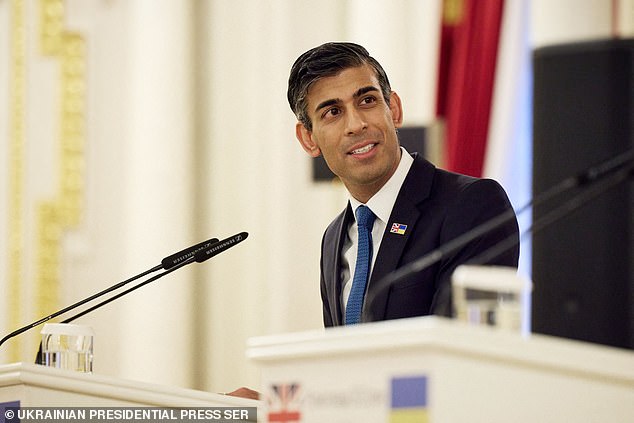 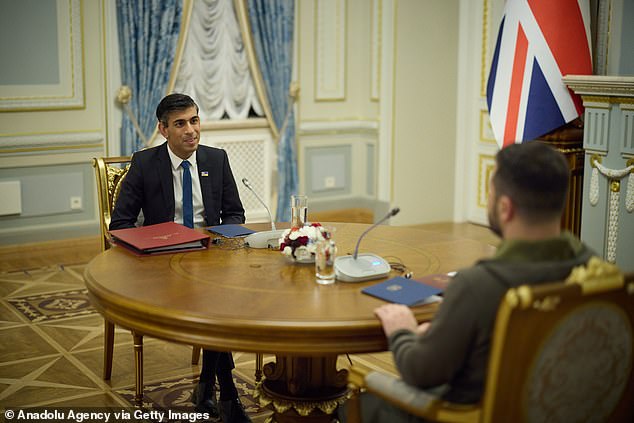 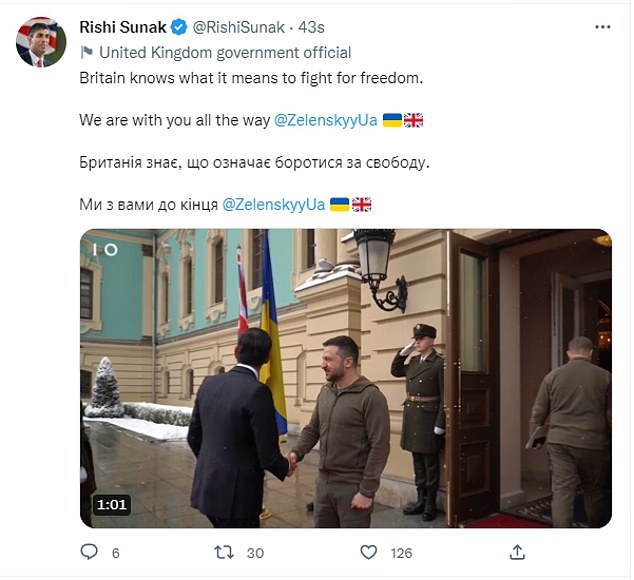 Despite accepting an invitation from Mr Zelensky to come to Kyiv, Mr Sunak’s predecessor Liz Truss never actually made the journey during her 44 days in office.

Mr Sunak has vowed that the close partnership between the UK and Ukraine will continue under his leadership.

The Prime Minister, who has spoken to Mr Zelensky on more than one occasion since entering Downing Street, used his appearance at the G20 this week to join with allies and other Western leaders to condemn Vladimir Putin’s invasion. 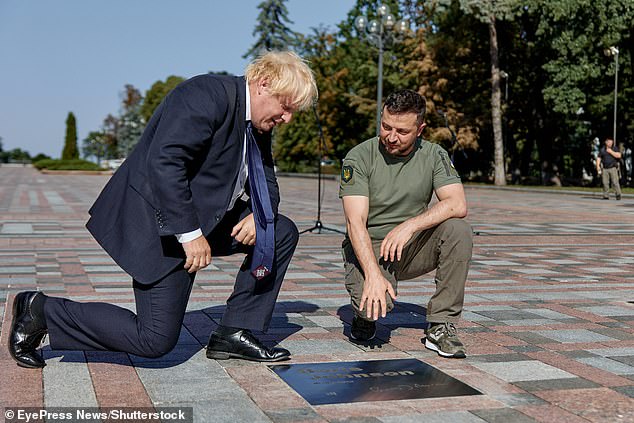 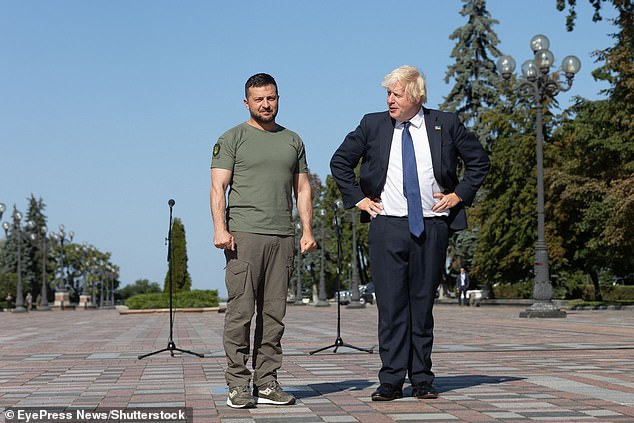 A video of the meeting, posted by Mr Sunak’s Twitter account, shows him shaking hands with the Ukrainian leader in a snowy Kyiv.

‘Welcome. How are you?’ Mr Zelensky asks the Prime Minister.

‘Really good to see you,’ Mr Sunak says as Mr Zelensky gestures at the falling snow.

The pair are shown shaking hands in front of the Union flag and Ukraine’s flag, before holding a one-to-one meeting.

The visit comes after a missile hit a Polish village close to the Ukrainian border, initially sparking concerns Russia had struck a Nato member state.

Some of the tensions have been eased after experts reported it is likely the hit can be attributed to Ukrainian defence forces. 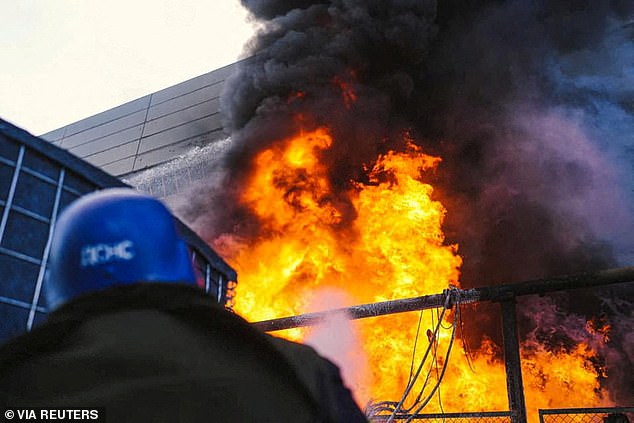 Firefighters work to put out a fire in a thermal power plant, damaged by a Russian missile strike in Kyiv yesterday 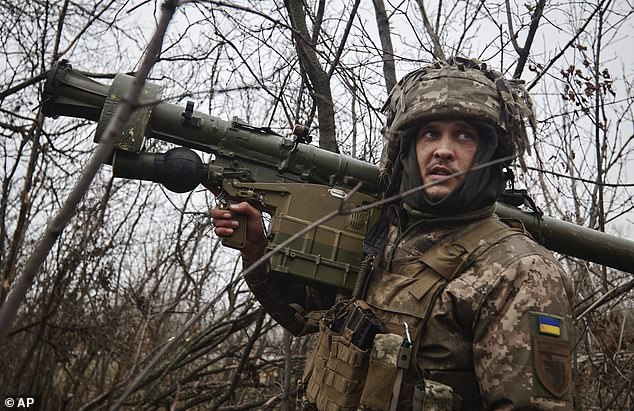 The new defence package pledged by the UK government consists of 125 anti-aircraft guns and technology to help take out Iranian-supplied drones.

This includes dozens of radars and anti-drone electronic warfare capability.

The UK will also send army medics and engineers to help the country defend itself against Putin’s forces.

Announcing the package, Mr Sunak said: ‘I am proud of how the UK stood with Ukraine from the very beginning and I am here today to say the UK and our allies will continue to stand with Ukraine, as it fights to end this barbarous war and deliver a just peace.

‘While Ukraine’s armed forces succeed in pushing back Russian forces on the ground, civilians are being brutally bombarded from the air.

‘It is deeply humbling to be in Kyiv today and to have the opportunity to meet those who are doing so much, and paying so high a price, to defend the principles of sovereignty and democracy.’ 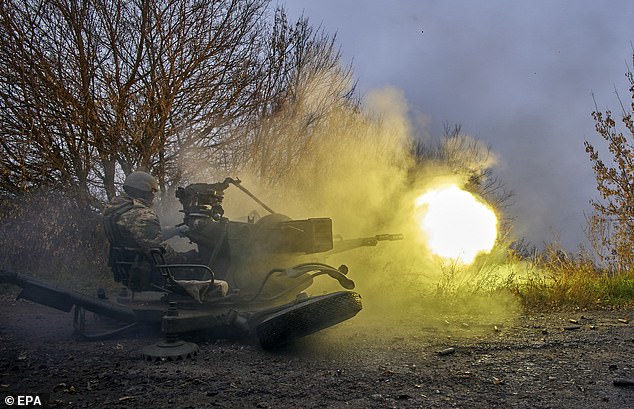 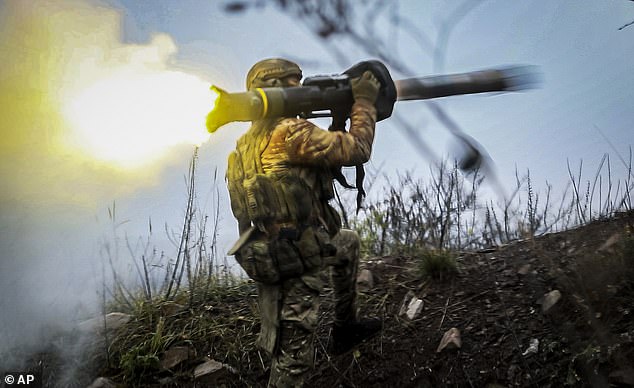 Tuesday saw one of Russia’s largest-scale attacks on Ukraine to date, with over 100 missiles fired on cities across the country including Kyiv.

The bombardment left half of Kyiv, where at least one civilian died, and the whole city of Zhytomyr without power.

Strikes were also reported in Lviv, which was said to be in a partial blackout, with Kharkiv, Vinnytsia, Rivne, Odesa, Zaporizhzhia, Chernihiv, Khmelnytskyi, and Ivano-Frankivsk also targeted – though the situation in those cities was less clear.

It came just hours after Ukrainian president Volodymyr Zelensky – speaking via videolink from Kyiv – told world leaders at the G20 Bali summit that he is ready to end the war provided Russia withdraws its troops from areas it currently occupies.