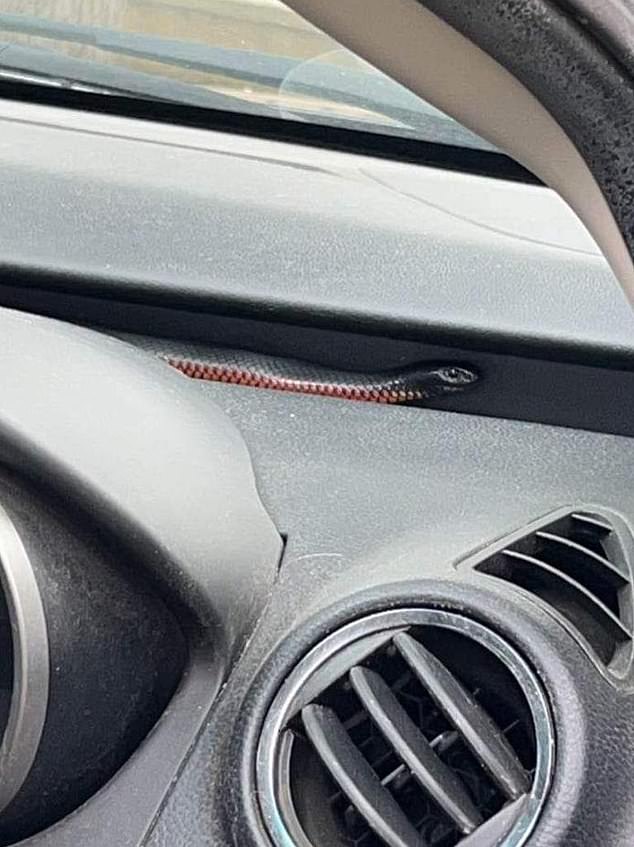 An Adelaide woman has had a near-hiss in her car when she discovered a deadly red-bellied black snake lurking behind the steering wheel.

Shelley Bridge only noticed the killer creature at the last moment when it suddenly reared its head at her as she put her hands on the wheel just centimetres away.

The reptile was sunbaking on the dashboard of her Maxda CX7 at Blewitt Springs when Ms Bridge got into her car on Tuesday.

Ms Bridge said she remembered seeing the snake near her the car weeks earlier but never even thought about it slithering inside.

Adelaide woman Shelley Bridge has had a close encounter with a red-bellied black snake sunbaking on her dashboard, only noticing as she put her hands on the steering wheel

‘It was 10cm away from my hands… I said a few expletives,’ Ms Bridge told AdelaideNow. ‘I quickly jumped out of the car and started screaming.

‘I park my car up next to my house on our rural property and we actually saw a snake drop from the car two weeks ago. I thought it was outside the car.

‘I’ve had passengers and dogs in the car since and it never popped up over that period.’

By the time local snake catcher Pete arrived, the reptile had once again hidden in the depths of the vehicle and couldn’t be found.

Ms Bridge then saw the snake again on Thursday and called Pete back who then successfully managed to find the snake after 90 minutes of searching.

He also located snakeskin in the spare wheel compartment in the boot, proving the serpent had set up home in the Mazda home for weeks. 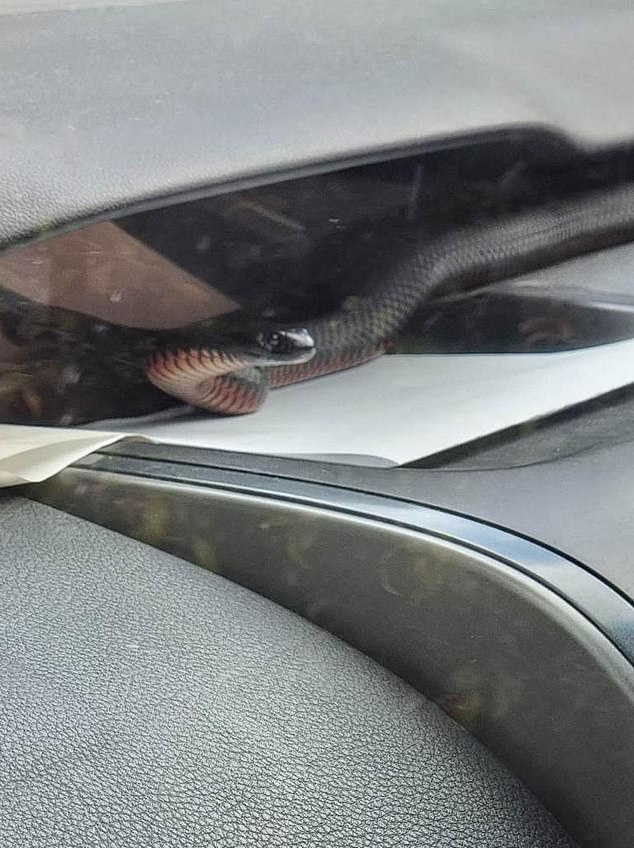 Ms Bridge said upon reflection she saw the snake weeks prior but didn’t register that it may have slithered into her vehicle. She said it was the first time she had an encounter with a snake so close to her property in more than 10 years

‘I didn’t drive it for a couple of days and on Thursday at about 10am I found it sunbaking on the dash again, so I quickly called Pete,’ she said.

‘He just jumped in the car, grabbed it by the tail with no gloves and out came “Sydney” the snake.’

While Ms Bridge is relieved her snake stowaway has been removed, she admitted she was now paranoid – and painstakingly double-checks the car before she gets in.

Ms Bridge said it was the first time she had an encounter with a snake so close to her property in more than 10 years.