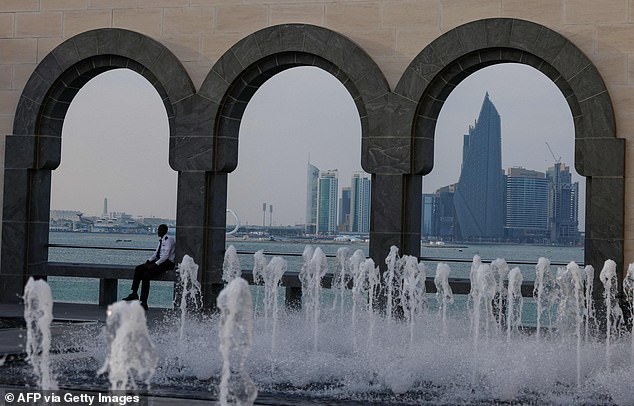 Migrants working as security guards at a park in Doha set to be packed with World Cup fans claim they are being paid as little as 35p an hour – as the Gulf nation faces more backlash on the eve of the global tournament.

The staff are deployed across Al Bidda Park, a sprawling green space linked to the Fifa Fan Festival.

As World Cup fever spreads across the Gulf nation, fans will flood the park and enjoy pristine green lawns, shaded picnic spots and stunning views across the Doha skyline.

But behind the scenes – and long after fans have vanished for the day – the guards will continue patrolling the area despite claiming to be paid shocking amounts.

The Guardian spoke to Al Bidda Park security staff – none of which are contracted to Fifa or deployed in the Festival.

Shocking revelations show that the guards claim to work 12-hour shifts and usually get just one day off a month.

The stark reality is that migrants working in Qatar may not even get an opportunity to see any of the country riddled with human rights issues.

‘We just go between our duty and our accommodation,’ one guard said holding out his mobile. ‘You can show me anywhere in Qatar and I won’t know where it is.’

The terrifying claims come less than 48 hours before the start of the controversial 2022 Fifa World Cup.

Migrants working as security guards in a park central to Qatar’s World Cup festivities are believed to be being paid as little as 35p an hour. Pictured: Security guard sits under an arch at the Museum of Islamic Art 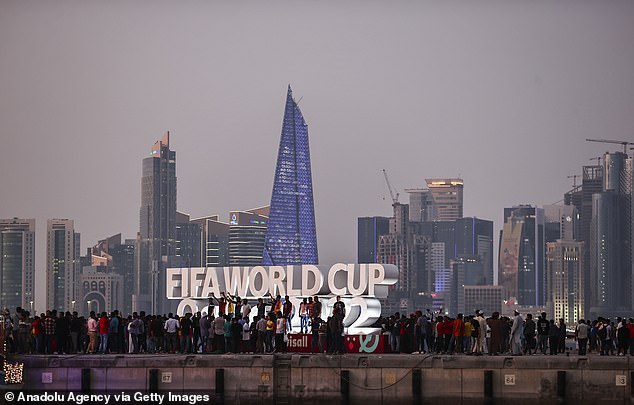 Shocking revelations show that the guards claim to work 12-hour shifts and usually get just one day off a month. Pictured: Doha, the capital of Qatar 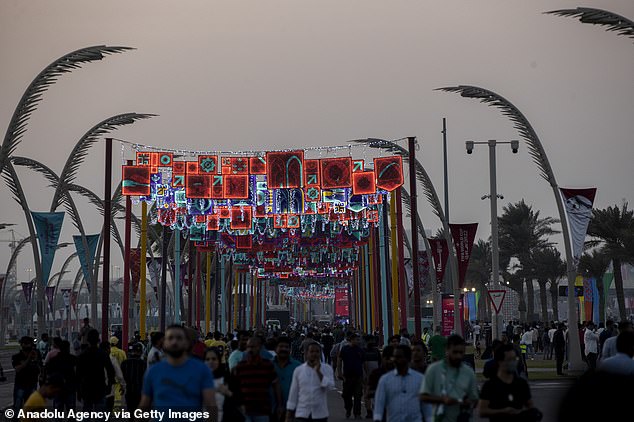 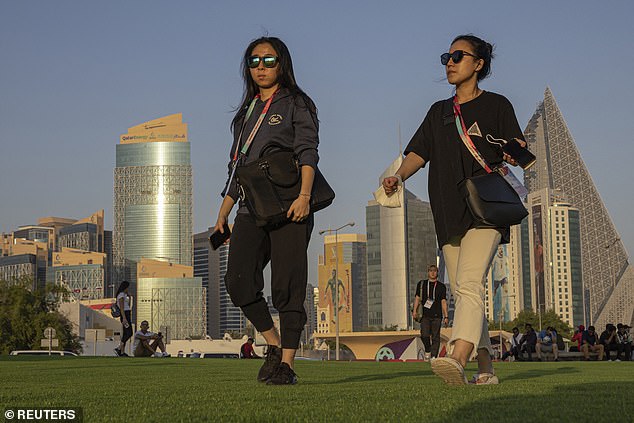 The first game will see host nation Qatar take on Ecuador, kicking off a tournament plagued with international criticism over the nation’s extremely strict interpretation of Islam which restricts women’s rights and criminalises members of the LGBTQ+ community, as well as banning public displays of affection and public alcohol consumption.

Worker’s pay notifications, confirmed by their accounts of working hours and pay, suggest the guards are paid 1330 rials (£310) per month for 348 hours of work – with a small food allowance.

The Guardian’s analysis highlights that this included 104 hours of overtime, which they receive 150 rials for.

This would equate to less than 35p an hour – which could be a breach of Qatar’s labour laws.

Despite claiming to be working in horror conditions, one security guard alleged: ‘It’s illegal, but the government keeps quiet, so what can we do?’

Meanwhile, another said: ‘We put up with it because we need the money.’

Others remain somehow positive, saying that they are happy to get something because it is more than they make at home. 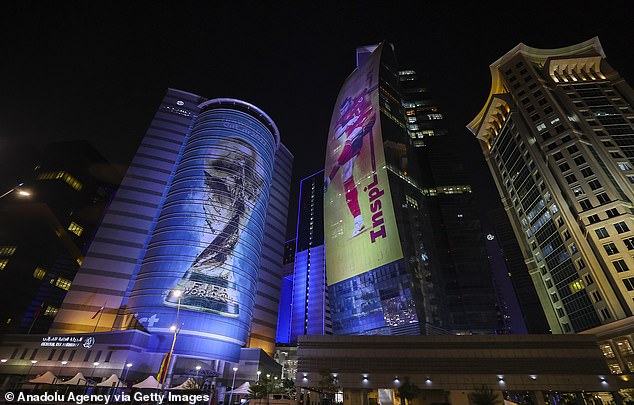 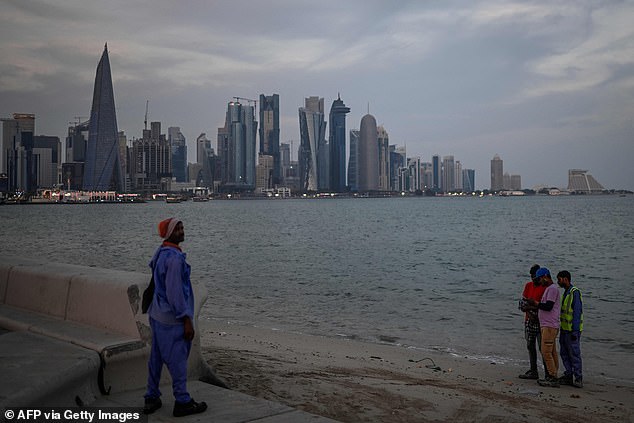 The tournament is plagued with international criticism over the nation’s extremely strict interpretation of Islam which restricts women’s rights and criminalises members of the LGBTQ+ community, as well as banning public displays of affection and public alcohol consumption. Pictured: Workers stand in front of Doha skyline 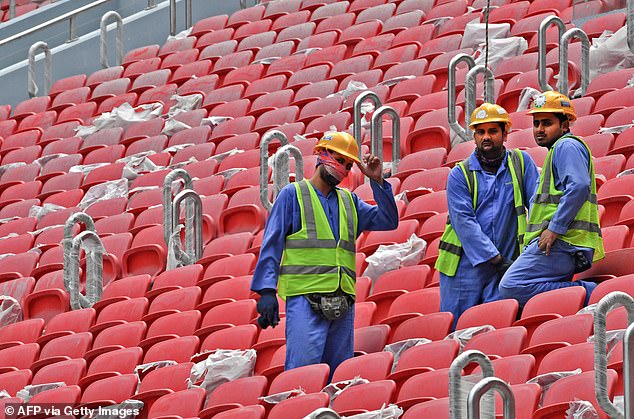 Qatar faces serious allegations of abuse of migrant workers – many of whom are thought to have died in the heat but Doha claims just three deaths are attributable to construction project. Pictured: Workers at the new al-Bayt stadium in 2019

Qatar faces serious allegations of abuse of migrant workers – many of whom are thought to have died in the heat – who built the World Cup stadiums and infrastructure to cope with more than one million fans descending on a country with a regular population of just 300,000.

Officially, Doha says just three deaths are directly attributable to the construction project. But human rights groups say the figure stands at around 6,500.

In April, a damning report from Amnesty International UK found that abuses in private security sector are ‘systematic and structural’.

It claimed that one Bangladeshi security guard worked for three years without a day off.

The 74-page report documented the experiences of 34 employees who had been subject to dreadful conditions.

One man even described the first year in Qatar as ‘survival of the fittest’. At the time, Stephen Cockburn, Amnesty International’s Head of Economic and Social Justice, said: ‘Employers are still exploiting their workers in plain sight, and the Qatari authorities must take urgent measures to protect workers and hold abusers accountable.

‘Many of the security guards we spoke to knew their employers were breaking the law but felt powerless to challenge them. 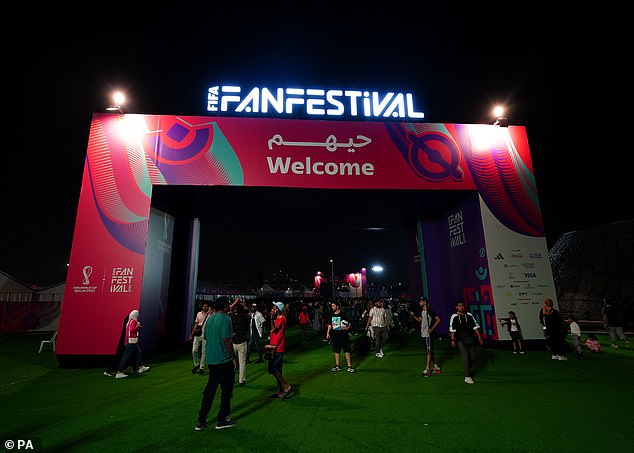 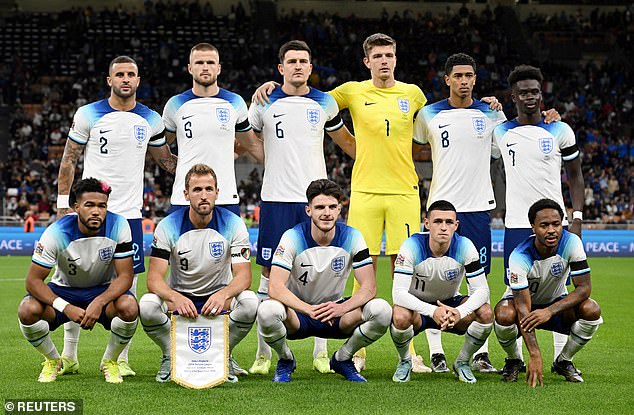 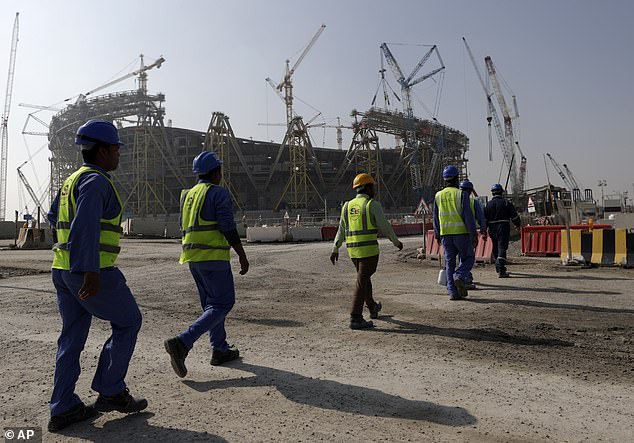 The workers all claim to have been forced to pay illegal recruitment fees in their home countries – ranging from £1,175 to £1,1650. Pictured: Labourers walking to the Lusail stadium

‘Physically and emotionally exhausted, workers kept reporting for duty under threat of financial penalties – or worse, contract termination or deportation.

‘Despite the progress Qatar has made in recent years, our research suggests that abuses in the private security sector – which will be increasingly in demand during the World Cup – remain systematic and structural.’

Labour reforms from Qatar should mean the Al Bidda Park security staff can transfer to a better-paying job, but in practice, workers say this is extremely difficult and would struggle to get permission to.

And in more damning revelations, the workers all claim to have been forced to pay illegal recruitment fees to recruitment agents in their home countries – ranging from £1,175 to £1,1650.

The fee supposedly secured their job but meant they had to work months on end to repay the fee.

The Guardian, who visited one of the camps the workers stay in, found men sharing beds with their possessions due to there being no lockers.

Cooking equipment was stored under beds and toilets were in horrific conditions, forcing some staff to wait to use the ones at work instead.

The head of the Al Nasr Star Group confirmed to the paper that the guards do work 12-hour shifts but have two hour breaks each day and one day off a week. One worker said he was given breaks during summer, but the rest claim they do not. 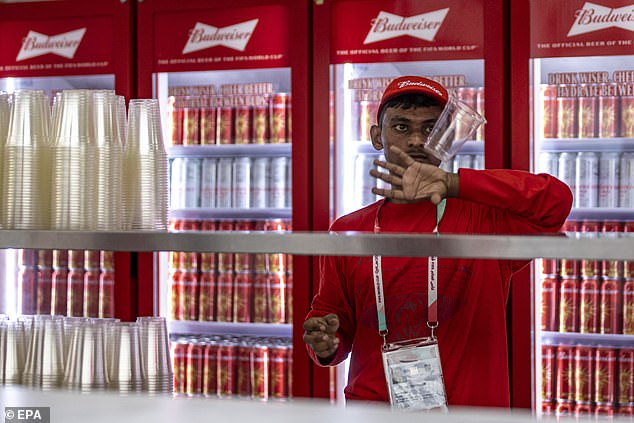 Fans watching games at the World Cup will be unable to purchase any alcohol on site, instead only being able to buy it in designated Fan Zones away from stadiums 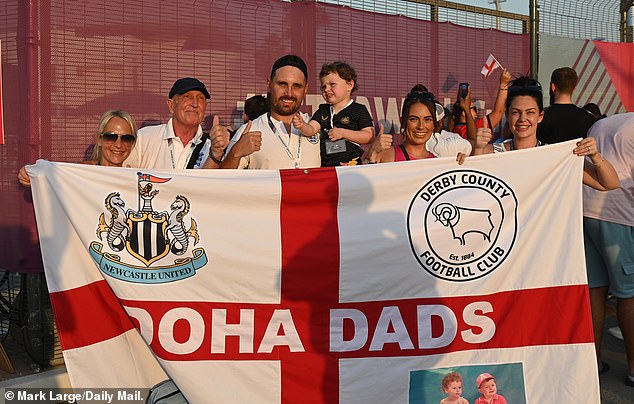 The tournament has become a major talking point as time ticks on towards Sunday 4pm, when football will ultimately do the talking.

But just yesterday, the nation faced more criticism as furious football fans demanded refunds from World Cup bosses, saying saying handing the tournament to Qatar has ‘ruined’ it after a shock announcement revealed alcohol is banned from all stadiums.

England fans already in Qatar have slammed FIFA as a ‘disgrace’ for the unexpected booze ban only 48 hours before the World Cup kicks off, adding that attending the tournament ‘feels like Big Brother’ is in charge.

Only a few hundred England fans were in Doha when FIFA announced that alcohol would not be sold on stadium concourses after coming under pressure from the Qatari Royal family.

The ban came as a shock to most fans after FIFA had previously reassured them that despite the country’s strict alcohol laws, they would be able to purchase it while enjoying the games.

But those fortunate enough to be sat in corporate boxes, where tickets cost more than $22,450 each, will still be able to enjoy an array of alcoholic drinks.

A Qatari government official told MailOnline: ‘The conditions described do not paint an accurate picture of the situation for migrant workers in Qatar. Of course, isolated cases occur, just as they do in every country.

‘Over the past decade, extensive action has been taken to combat exploitative labour practices and provide accessible channels for workers to make complaints.

‘Last month, 3,712 inspections were carried out by the Ministry of Labour at work sites and accommodations across the country. When violations are recorded, corrective action is taken, and offending companies are penalised.’

The official went on to say that ‘breaches of the law will not be tolerated’. ‘Over 420,000 workers have successfully changed employer in Qatar since a new law was introduced in 2020 to make job transfers easier,’ they added.

‘Qatar has tackled the practice of wage theft head on. 97 percent of all workers are now covered by the Wage Protection System, which ensures all wages are paid in full and on time.’

The official said they have ‘repeatedly said systemic change does not happen in an instant – it takes time to transform a labour market’. ‘In other countries, this was a decades-long process, and in many countries – including in Europe – this process is still ongoing.’