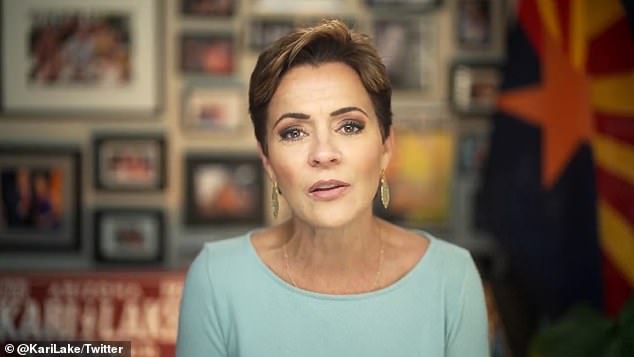 The Washington Post reported that Lake received a standing ovation when she showed up for a luncheon hosted by The America First Policy Institute, an advocacy group created by former Trump advisers.

The America First Policy Institute was holding a ‘Gala and Experience’ at Trump’s Palm Beach home and club, taking place on Thursday and Friday, The Post said.

In a video posted online of remarks Lake made at Mar-a-Lago Thursday night, she said ‘our elections are a circus run by clowns.’

Going into the November midterms, Lake looked like one of the MAGA movement’s brightest rising stars – a former television anchor who parroted Trump’s ‘big lie.’

She was even mentioned as a potential 2024 VP pick.

But now her political future is in question. 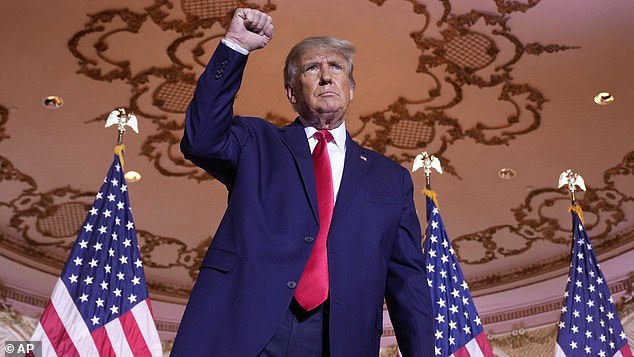 Former President Donald Trump used the ornate ballroom at Mar-a-Lago to launch his 2024 presidential campaign on Tuesday night. The Florida club is holding a two-day ‘Gala and Experience’ for the America First Policy Institute

Like Trump, Lake has not conceded to Democrat Katie Hobbs – indicating long before Election Day that she might not engage in that formality.

‘Rest assured I have assembled the best and brightest legal team, and we are exploring every avenue to correct the many wrongs that have been done this past week,’ Lake said in a 2 1/2-minute video released Thursday – her most extensive public comments since losing the election.

‘I’m doing everything in my power to right these wrongs,’ she said.

She pointed to long lines at some polling places that were exacerbated by problems with ballot printers at about a third of the vote centers in Maricopa County, the largest county in the state. She said the problems disenfranchised voters who couldn’t wait at the polls.

‘What happened to Arizonans on Election Day is unforgivable,’ she said.

County election officials said that all ballots were counted and that voters could go to any polling place in the county, many of which had little to no line, with wait times posted online.

Election officials traced the problems to a printer setting that sometimes led to ballots printing too lightly for the on-site tabulators to read.

They said they used the same settings in the August primary and for pre-election testing and there were no widespread issues.

About 17,000 ballots were not scanned at precinct-based vote counters and were instead placed in a collection box to be counted by more sophisticated machines at the county’s election headquarters.

The collection box has come to be known as ‘box three.’

Bill Gates, the Republican chair of the Maricopa County Board of Supervisors, has blamed state GOP chair Kelli Ward and other prominent Republicans for causing delays and long lines because they told their supporters not to use box three.

‘This team, we have accepted our responsibility in this,’ Gates said Monday. ‘But I’m not willing to accept responsibility for issues that were caused by others. And it is clear to me that those lines were longer because leaders in one political party were spreading misinformation.’

At least one voter Lake highlighted in an online video Thursday said he didn’t trust putting his ballot in box three, ‘because it will probably go in the garbage,’ and said he waited in line again to cast a different ballot.

Republicans asked a judge to extend the hours at polling places because of the issues.

The judge declined, saying they presented no evidence anyone was disenfranchised.

Democrats voted overwhelmingly via ballots received in the mail.

In-person Election Day votes heavily favored the GOP because Lake and other prominent Republicans had claimed it was more secure, which election experts dispute.

Trump has pushed that voting should only take place on Election Day using paper ballots, something he included in his Tuesday night 2024 presidential announcement speech.

Lake has said little since The Associated Press and other news organizations called the race for Hobbs on Monday.

Late Wednesday, she posted video with clips from the campaign trail set to the lyrics, ‘I won’t back down.’

Her video Thursday said Hobbs, who is currently secretary of state, should have recused herself from any role in the election.

The secretary of state creates election procedures and certifies equipment, but her office does not count ballots, a task that is done by the state’s 15 counties.

Hey, Arizona. Kari Lake here. I wanted to reach out to you to let you know that I am still in this fight with you. For two years, I’ve been sounding the alarm about our broken election system here in Arizona. And this past week has confirmed everything we’ve been saying. Well, we called for Katie Hobbs to recuse herself over a year ago.

They ridiculed us. It turns out we were right. The fox was guarding the hen house, and because of that, voters have been disenfranchized when we raise concerns. And I filed a lawsuit months ago to get rid of the electronic voting machines. They said we were crazy.

Well, it turns out we were right. On Election Day, nearly half of all polling locations had problems with tabulating machines and printers. Malfunctioning tabulation machines forced voters to wait in line for hours to exercise their sacred right to vote. I talked to voters who waited in line for hours. One man told me he went to a location and there was a three hour line because the tabulators weren’t working. He drove 15 miles to another location and the printers weren’t working. He drove another 15 miles and was finally able to cast his vote. But he’s not sure it counted. Our election officials failed us miserably.

What happened to Arizonans on Election Day is unforgivable. Tens of thousands of Maricopa County voters were disenfranchized. Now I’m busy here collecting evidence and data. Rest assured, I have assembled the best and brightest legal team and we are exploring every avenue to correct the many wrongs that have been done this past week. I’m doing everything in my power to right these wrongs. My resolve to fight for you is higher than ever.

Neuralink Shows Sake the Monkey Typing With Its Brain Chip