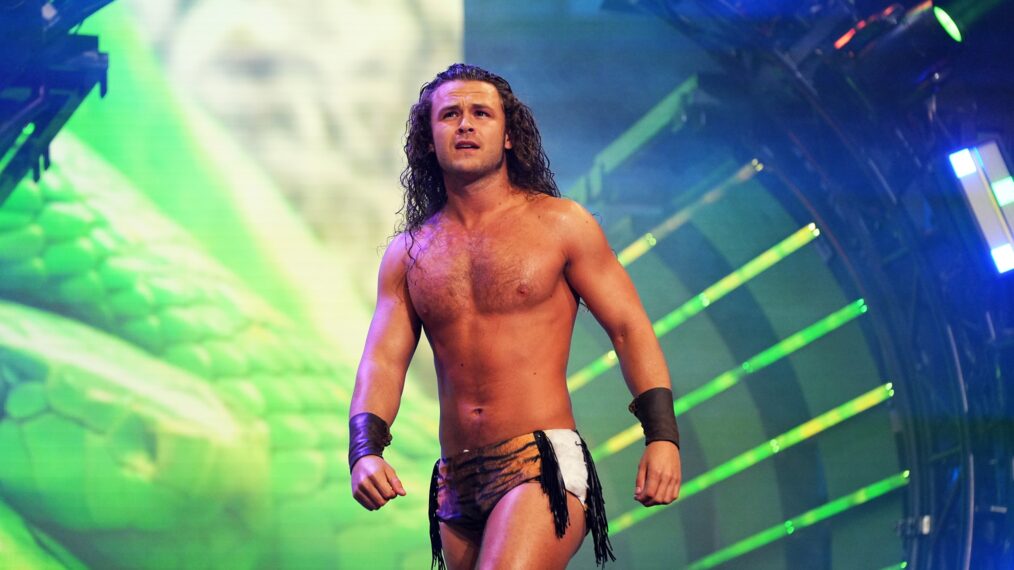 What a difference a year makes for Jack Perry. Then the 25-year-old better known to All Elite Wrestling fans as Jungle Boy was victorious at last year’s Full Gear show alongside Luchasaurus and Christian Cage against The Young Bucks and Adam Cole.

Fast forward to today and Luchasaurus turned on his longtime tag team partner with Cage orchestrating the whole scenario. The heated feud got personal as Perry felt those verbal digs against his family including his late father and actor Luke Perry. This war of words and attacks have bubbled over into the upcoming Full Gear when former championship partners Jungle Boy and Luchasaurus face off inside a steel cage.

Here Perry opens up ahead of the grudge match. We haven’t seen you wrestle as much recently. Is that by design? How are you feeling these days?

Jack Perry: I’m feeling good. In a way, it’s nice and a little different. I feel like I’m moving into a part of my career where I don’t have to wrestle every single week. It feels like all the things I’m doing now are a little more meaningful. At the same time, for three years I was going every single week. Physically I feel good. I’ve really just been wrapping my head around what’s coming.

Was the end of Jurassic Express something that came abruptly from your standpoint?

The main thing we were getting to was the Christian turning on me and both of us, which we always knew would come at the end of the title run with the tag belts. Then it got a little wonky at the end because there were events that were out of our control. It changed the specifics of these matches around. As far as the breakup of the team, it also didn’t really go the way we had thought. The kind of heel Luchasaurus. There was an organic way that panned out after that based on what people seemed to be into. It was always something coming down the pipe eventually.

And tag teams don’t have a good track record of staying together.

The way we felt is we lost the tag belts. We’re obviously not going to have those back any time soon, so then it becomes what is there to do at this point? Just go back down the chain. I think we are all happy with how it has turned out.

It seems like we’re seeing more of Jack Perry the person onscreen. How do you feel to bring out more of yourself?

What I loved about the Jungle Boy character is I didn’t talk or do any of this bullish-t. You are just going to watch me wrestle. A lot of people don’t like to wrestle as they like to do other stuff. A lot of people prefer to cut promos and all that stuff. I’m working on that, but I love to wrestle. I loved that Jungle Boy allowed me to do that. Then paired with Luchasaurus, it fits in a weird way. People dug it. At this point, not referencing my personal life has now been blown out of the water. It felt a little silly to me to have Christian saying all these crazy things and referring to me as Jungle Boy. It felt like a time to get serious with the whole thing. I brought my real self forward a bit. How has it been having the family involved? They’ve really gotten in on the story.

My family has always been very supportive. Any time I’ve had a big match they’ve wanted to come see it. In the time we were together Christain had gotten close to my family. We all hung out and had dinner a couple of times. There are people who have tried to go in a similar route Christian did before, but I felt like when that happened it was more for them. It was to get a shock headline for them. In the long run, it didn’t do a lot for me. The thing about Christian doing it is the whole thing is I think in the long run this will all benefit me. Also, it’s nice to get that out of the way. The stuff he said. Now if the next guy wants to say that, it’s already been done.

You’ve managed to have a relatively private relationship with Anna Jay. Aside from that viral photo of you two, we don’t see much. It’s really different compared to other wrestling couples.

I’m not a very public guy in general. In terms of social media, I don’t really share what I’m doing in my day-to-day life. It’s not that I don’t want people to know we’re together. I do. I thought the photo was a fun out-of-the-blue thing. You look at Sammy [Guevara] and Tay [Melo]. I just could never do that. It feels a little maybe like exploiting your real-life relationship, which is fine if you want to do it. It’s up to you. It has influenced their job now. They’ve become that on TV. Every day you are bombarded with so much stuff. If that makes you happy, more power to you. That’s not something I’d ever want to do. I’m happy with the relationship I have and the way it’s going. I just don’t feel the need to shove it down everyone’s throats in that way. Her too. She is doing her own thing. She is successful in what she is doing. Work and real life, I think they have their separate places. I don’t need to mix the two of them.

Have you gotten more of the acting bug?

I haven’t. I feel in a way I wouldn’t be any good at it, so I’m not sure I want to try it. I think as far as my wrestling persona even, I don’t feel like I act. I get a lot of flack for promos, but I don’t like things that feel overacted and cheesy, and embarrassing. So I go the opposite route, which may come off dry or flat. It’s more how I talk in real life. I don’t want to be out there shouting all the time. It’s not who I am. I just go out there and have wrestling matches I want to have. Luckily, I feel people connect with me…Right before I got signed to be a wrestler, my plan B was to be a stuntman because there are a lot of similarities with wrestling. I did a stunt for a commercial and thought I was really cool. I went to film school for a minute, so I’m interested in all that stuff. It’s not my dream to be an actor. I think a lot of people get into these because they want to be actors. That’s not the case for me. At the same time if something happened to fall in my lap and it was cool I don’t see why I couldn’t pursue it. Your cage match with Luchasaurus has been building for some time. What can fans expect at Full Gear?

I first met him when I was 10 years old in wrestling class. He was in college. I wrestled for a couple of years and retired to go to middle school and came back to high school where I ran into him again. We were training in a dingy warehouse and worked on the independents together and came to AEW as a bunch of nobodies. Through that, we rose up to be the tag champions. He has been my best friend, especially during the pandemic. We were traveling every week together. It’s a story of friendship and coming up together and betrayal. Then there is Christian added in there as a father and mentor. There is taking sides and backstabbing. This feels like the culmination of that. The cage ensures it is just the two of us. We want to excite people. We were always trying to push the limits as a tag team and now as opponents, it’s the same thing. We want to steal the show.