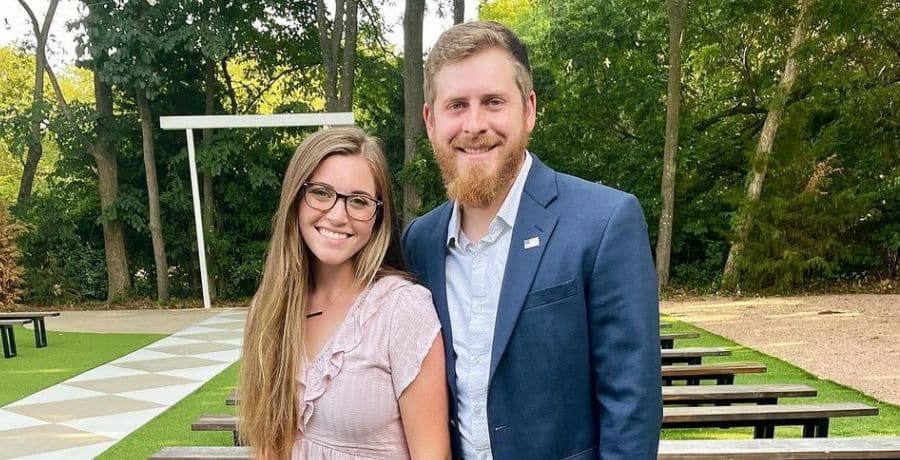 Former Counting On stars Austin and Joy Forsyth revealed their baby’s gender on Friday! The couple already shares a four-year-old son Gideon Martyn and a two-year-old daughter Evelyn Mae. So, is the newest Forsyth baby a girl or a boy?

Since Joy and Austin currently have a boy and a girl, this next baby will be a tiebreaker. In between her kids’ births, Joy also had a 20-week loss and named the baby Annabell Elise. She opened up about the tragic loss to her social media followers in 2019 shortly after it happened. Then, the following year, she welcomed her rainbow baby Evelyn to the world.

Fortunately, this pregnancy seems to be going well too, and now, the Duggar couple has an exciting update to share.

On Wednesday, Joy Forsyth hopped on her Instagram Stories to drop a little teaser about what’s ahead. The soon-to-be mother of three spilled that the gender reveal video would go live on Friday. So, fans knew to be on the lookout for the YouTube video.

Joy and Austin’s weekly YouTube videos typically drop on Fridays. But since this one is extra special, she wanted to give everyone a heads-up.

Now, the big reveal is finally live! Austin and Joy excitedly shared with fans whether their third baby is a boy or a girl.

In the new video, Joy Forsyth explained to fans that her sister Jana Duggar has the envelope with the ultrasound results. When Joy asked her before the gender reveal, two-year-old Evelyn said that she wants a baby sister. Joy and Austin both thought it was a girl. Many family members were able to come out for the reveal and shared their guesses too.

To reveal the gender, Joy and Austin threw darts at balloons. When the balloons popped, there was either blue or pink powder and confetti inside. Some were also empty. Then, they tallied them up. Whichever color there were more of revealed the gender.

At the end of the reveal, they announced it’s a boy!

Of course, Austin and Joy Forsyth’s social media followers are thrilled to hear the news and can’t wait to find out the baby’s name.

One other Duggar is known to be pregnant right now. There is speculation that others could have recently given birth or that someone else might be pregnant. Jeremiah Duggar’s wife Hannah is the only one confirmed to be pregnant besides Joy. Hannah is currently expecting her first baby and shared that it’s a girl. These two little cousins will be close in age.

So, did you think that Austin and Joy’s third baby would be a boy or a girl? Do you have any name ideas for this little one? Sound off in the comments section below, and come back to TV Shows Ace for more Duggar family updates. You can check out Austin and Joy Forsyth’s gender reveal video below.

Aubrey Chorpenning has been a freelance writer since December 2016. She enjoys writing, researching, spending time with her cats, and of course, watching TV!

DR MICHAEL MOSLEY: How you can tell when someone’s lying to …

DR MICHAEL MOSLEY: How you can tell when someone’s lying to …

Surprises abound in Sight and Sound critics’ poll of greates…