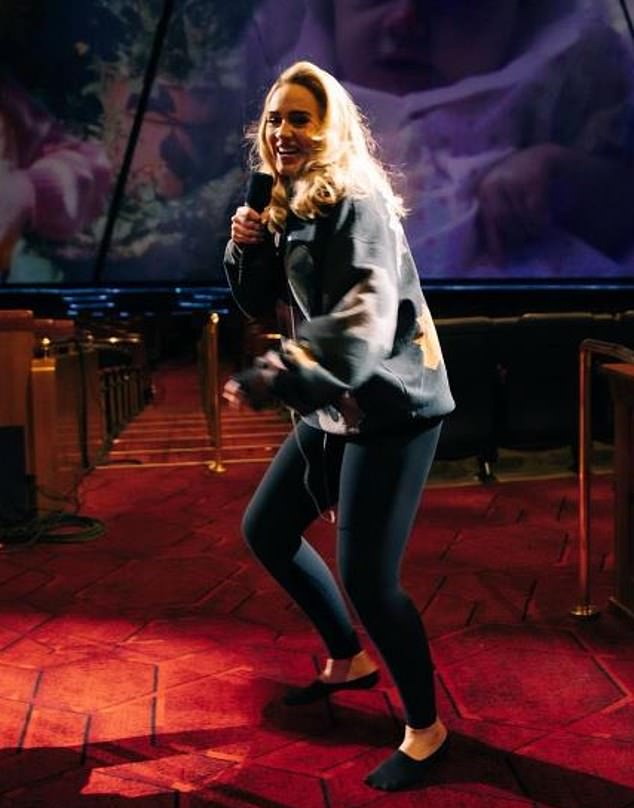 The stakes are high, as Adele and her team know only too well. Yesterday saw the first night of her now notoriously delayed four-month residency at Caesars Palace Colosseum in Las Vegas.

One down, 31 more potentially perilous performances to go. Now there is one overriding concern among her team: for the sake of Adele’s reputation, there can be not one single cancellation this time round.

Everyone is utterly focused on avoiding the pitfalls of the past, when Adele reached for a grand Vegas spectacle — only to crash embarrassingly to earth after deciding to cancel her planned shows in January less than 24 hours before she was due on stage, emotionally declaring ‘It just ain’t ready’.

Local Vegas journalist Scott Roeben — who broke the news of her residency back in 2021 — tells me Caesars Palace has been ‘working hard’ to make sure this tour is as drama-free as possible.

Everyone is utterly focused on avoiding the pitfalls of the past, when Adele reached for a grand Vegas spectacle — only to crash embarrassingly to earth after deciding to cancel her planned shows in January

‘What everyone is concerned about is that she really needs to not cancel one show because people fear another backlash would be very, very damaging. She already has a reputation as a diva. She cannot let the fans down again.’

Adele has long said she wants all her Vegas shows to be ‘intimate’ — the theatre at Caesars seats just 4,100 people, tiny for a woman who can fill stadiums — and hopes to natter away between songs and invite fans from the audience to join her on stage every night. Tickets are said to be selling for a staggering $38,000 a pop. Fans know how rare it is to see an idol this close up.

Some insiders believe the chance to see Adele live will be even rarer in the future: that this Vegas tour could well be her last.

Scott Roeben is one. He says: ‘The belief is this will be something of a swansong run. The gild is off the lily in terms of record sales, and Adele has said she wants to have a baby and do a college degree, her focus really is moving away from music. Her heart just isn’t in it.’ 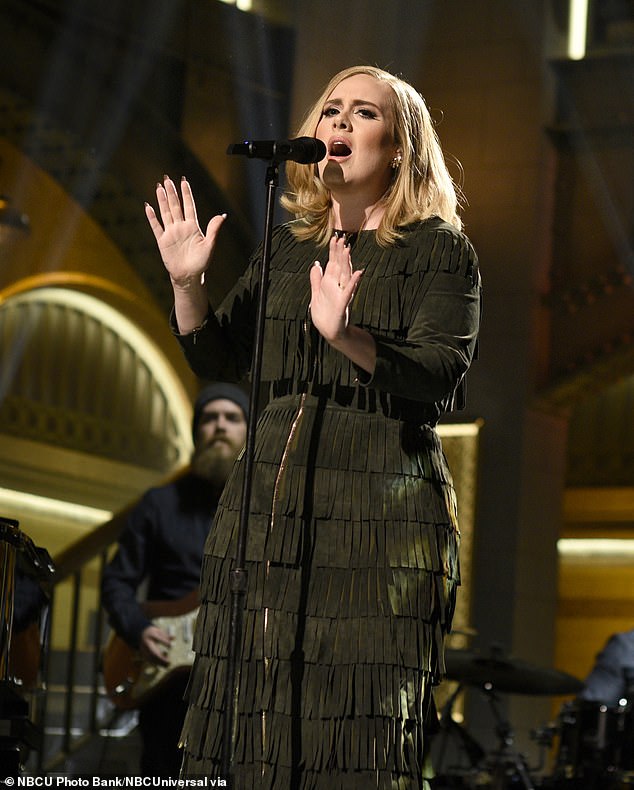 Adele has long said she wants all her Vegas shows to be ‘intimate’ — the theatre at Caesars seats just 4,100 people, tiny for a woman who can fill stadiums

For now, though, broody or not, Adele simply has to get through the residency. And that is no straightforward task: afflicted by stage fright, she is something of a tortured performer. Rehearsing, as she put it herself, for ‘12 hours a f***ing day’, she said last month when discussing her preparations: ‘I’m sick and tired of anything musical.’

Her remarks don’t quite reflect the enthusiastic tone you expect to hear from an artist. While she arguably had something to prove for past performances, like her world tour in 2016 — an experience she says she is ‘still getting over’ — that drive has abated.

It’s perhaps this emotion which was at the forefront on Thursday night as Adele tweeted of her extreme pre-show nerves, saying she felt a ‘million miles away from home.’ 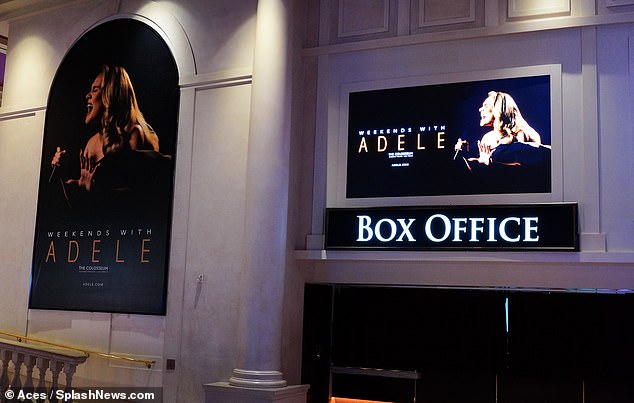 Offering her bolstering reassurance throughout is her loyal team — stylist Jamie Mizrahi, hair stylist Sami Knight and manicurist Michelle Humphrey. They will be with her every weekend, as will her boyfriend, the sports agent Rich Paul.

In the run-up to the show’s cancellation, insiders said the pair were constantly ‘in the middle of an emotional shout-out’ during rehearsals but their relationship is now stronger than ever and they have since moved in together.

Long-time managers Jonathan Dickens and Rose Moon will also be on hand.

And while Adele’s contract may tie her to four months of performing, it will undoubtedly be a feather-bedded prison.

When in town, she will stay in a £30,000 suite at Caesars Palace, with its own butler — which comes gratis for the performer as part of their agreement. 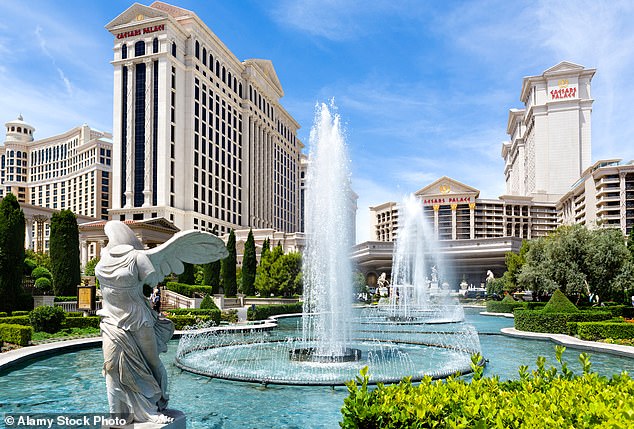 And while Adele’s contract may tie her to four months of performing, it will undoubtedly be a feather-bedded prison (Pictured: front of Caesars Palace, Las Vegas) 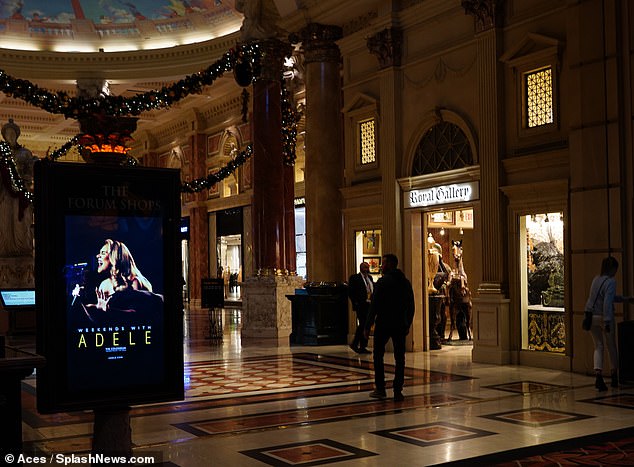 Some insiders believe the chance to see Adele live will be even rarer in the future: that this Vegas tour could well be her last

Between November and March she will spend just one night a week in the desert city in order to perform twice, flying to Vegas on a Friday to perform, sleep over, and then make the short flight back to Los Angeles every Saturday after she comes off stage.

It is possibly the world’s most lucrative commute: she is earning nearly $1 million per show.

More than that, cannily, Adele has apparently struck a deal through which she receives a whopping 50 per cent cut of the merchandise. Expensive branded goods adorn the shelves of the Caesars Palace shop.

Here you can spend $110 on a ‘Rolling in the Deep’ sweatshirt, snap up socks with glasses of wine on them, buy necklaces which read ‘divorced’ and even get Adele-branded tissues.

What won’t be seen, however, are the giant onstage white floating staircase and notorious water feature — damned by Adele as a ‘baggy old pond’ — which were planned the first time around.

Indeed, for all her complaints about long rehearsals, it’s clear that behind the scenes, many hundreds of others have also long been working hard, collectively holding their breath in the hope that the new set would pass muster to please the mercurial Adele. 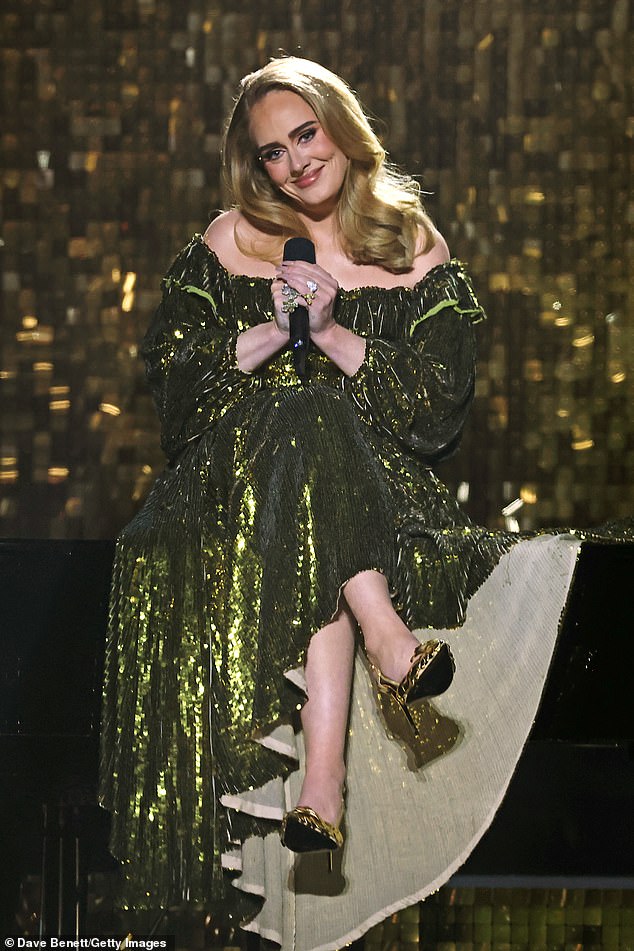 While back in January, the singer had fired set designer Esmeralda Devlin, a hugely respected professional, ‘in a panic’ after a ‘butting of heads’, things were calmer second time round.

Sources suggest Adele demanded constant changes in the run-up to the first opening night, and had never really been clear about what she wanted. In Devlin’s place is Londoner Kim Gavin, who warmed up for this gig with visits to Vegas over the summer, and took charge of her set at the Hyde Park concerts in July, where Adele performed in front of an understated curtain of gold and bronze discs which blew in the breeze and caught the lights.

Gavin has just completed the staging for a show featuring the world of Bond at the Royal Albert Hall — a fairly comparable venue in size as well as a comparable concert in tone.

Back in January, Adele pinned the blame for the cancelled show firmly on Covid, tearfully declaring: ‘Half my crew and team are [ill] with Covid and still are, and it’s been impossible to finish the show.’

Since then, however, she’s returned several times to the question of why she pulled the rug on a $150 million production — and it’s notable that the excuse of Covid has been ditched.

In July she told BBC Radio 4’s Desert Island Discs that the primary issues had been artistic.

And despite fans losing thousands of pounds in travel and hotel bills, for which Adele said she was ‘devastated’, she was also notably defiant.

‘I don’t think any other artist would have done what I did and that is why it was such a massive, massive story. It was like, “I don’t care. You can’t buy me, you can’t buy me for nothing. I’m not going to just do a show because I have to or because people are going to be let down or because we’re going to lose loads of money.” ’

Scott Roeben, however, observes: ‘It was damaging to her because of who she was as a performer.

‘The expectation of her because of the music is of someone who is genuine and straightforward, and this seemed not to be.

‘I believe she was upset, I don’t think she was pretending to be upset — but I do think that she was looking for a reason to explain the cancellation.

‘She didn’t want to look like a cry baby or temperamental artist so she picked on Covid — maybe ten per cent of the reason and made that into the reason.

‘The initial postponement was primarily an artistic decision coloured by her problems behind the scenes and problems with the creative team, and really not much to do with Covid.’

This time round, says Roeben of Casino.org: ‘It’s going to be an Adele show, but not a Vegas show. I think that last time they were trying to bring it up to a level with Katy Perry and Lady Gaga but that wall-to-wall spectacle never felt right for her.’

Now, though, comes her chance to wipe away those memories, and repair that reputational damage.

Adele has promised those who have bought tickets: ‘I’m going to give you the absolute best of me.’

But there’s a real possibility that it could be for the last time.